Royal Enfield are venturing into the unknown with two new models they’re hoping will bring more riders to the brand and more people into motorcycling – the 650cc parallel twin Interceptor 650 and Continental GT 650. Paul went to Santa Cruz to check them out. Royal Enfield has gone through a massive expansion in recent years, and the figures are truly astonishing. Last year alone, 850,000 units rolled off their production line in Chennai, India, with their output growing 50% annually over the last five years. They purchased one of the premier chassis design companies in the world, with Harris Performance involved in the design of the frame that runs across both platforms. And their new Technology Centre in Bruntingthorpe, Leicestershire, has grown to 120 staff incorporating experts from many other successful motorcycle companies. There’s one thing for sure, the company that can lay claim to being the oldest motorcycle brand in continuous production (they produced their first motorcycle in 1901) is aiming to be a big player on the global scene. 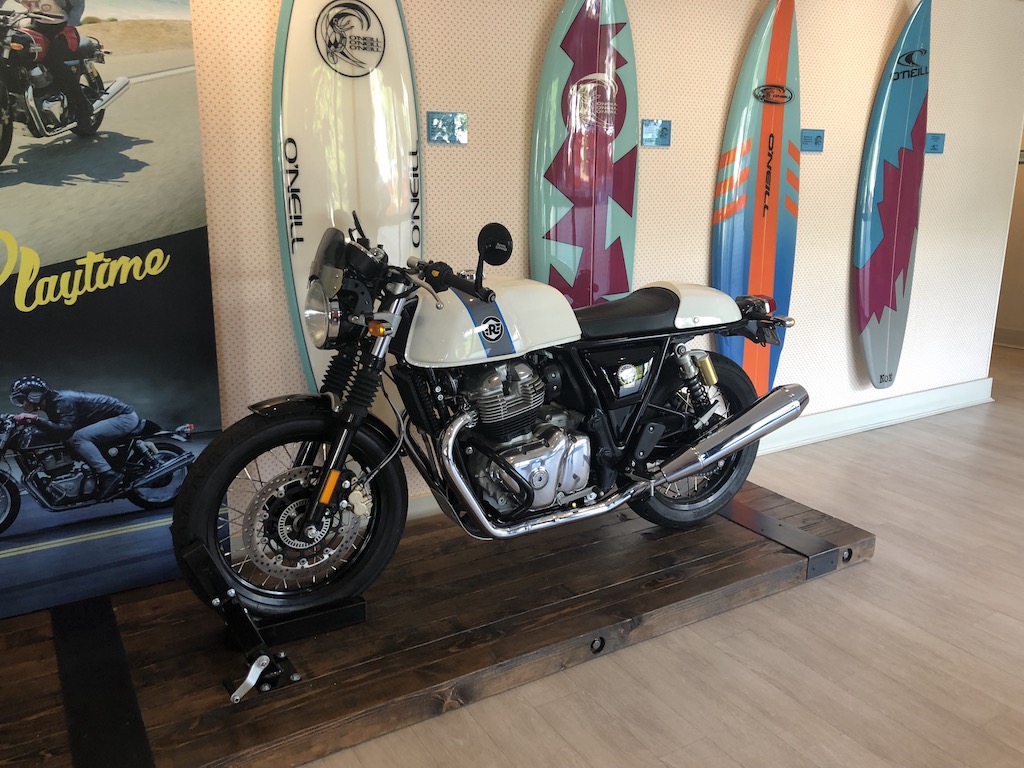 But what are the two new models about?

First up, this is Royal Enfield’s first twin cylinder motorcycle in 50 years, so it’s a big deal. They looked at the market and decided there was room for a mid-capacity twin, with most manufacturers constant increases in capacity seeing the middle-weight class somehow moving to 800cc and above.

The next challenge Royal Enfield set themselves was to make it a global model, that is, the same specification of bike for every market around the world. So whether you’re buying a new Continental GT in India or New Zealand, it’s going to come with the same level of features like fuel-injection and ABS braking, but still at the affordable price we expect from the Indian manufacturer.

The Continental GT 650 Twin is an evolution of the current 535cc model, with the styling of this classic Café Racer harking back to the fifties and the original 250cc version. Clip-on handlebars, twin rear shocks, 18-inch wheels and a single seat are set to make the new Twin an instant hit with Café Racer community, with the styling spot-on. Add some of the factory accessories and this is easily the sexist Royal Enfield to roll off the production line. Simple twin analogue clocks sit in front of you as you reach to the handlebars, although despite the riding position looking like it might be a touch extreme, it’s comfortable enough for a day in the saddle without any complaints. And looking at the slim seat, that’s a clever trick.

The Interceptor (what a great name!) 650 Twin is an all-new model, with Royal Enfield taking inspiration from the machines that dominated the American scene in the sixties. Sitting on the same chassis, suspension and wheels as the GT 650 Twin, the only different is the handlebars and a slightly higher level of preload on the rear suspension to handle the more rearwards stance of the rider. While the main prerequisite for the design team was to make the new models fun enough for an experienced rider to enjoy but also easy enough for a new rider to handle, there was also the brief that it must be able to hit the magical ‘ton’ or 100mph that was the benchmark for Café Racers back in the sixties. And despite the new Twin only pushing out 47hp, it’s happy to rush up to – and beyond – the magical figure if you’ve got enough road and strong enough neck muscles. Sitting at open road speeds is comfortable, and pulling out to pass pesky traffic isn’t a butt-clenching experience.

In fact, the motor is one of the standout features of the new bikes, with the smooth power delivery produced via an ECU that had a majority of input from a Kiwi engineer. With 80% of the 52Nm of torque pumping by 2,000rpm, the twin drives smoothly from this low in the rev range before picking up its heels at 4,000rpm and beyond. It’s a fun motor, and they’ve achieved a powerplant that is dynamic enough to be fun, but also user-friendly. Oh, and it’s silky smooth too, with the balancer shaft knocking out most of the vibrations and the 270-degree crank taking care of the rest. It also gives that lovely off-set firing order that makes the exhaust note fit perfectly with the image. Then there’s the gearbox which is slick enough for clutchless up and downshifts, while the light feel to the clutch is thanks to the slipper and assist clutch mechanism which puts pressure on the plates while they’re under load yet won’t let the rear lock if you get a bit carried away with your downshifts. And despite the brakes only comprised of a single floating disc at the front gripped by a single twin-piston caliper, the fact it’s got sintered pads and input from brake masters Brembo shows with the way it performs and the feel you get from the level.

With Aussie racer, Paul Young and his team spending tens of thousands of kilometres on the road developing the chassis, you wouldn’t think there’d be that much you can do with a simple steel frame. But Youngy made an important call late on in the production process, steepening the steering angle by 20-degrees. It wasn’t a cheap process to make the change, but he was right in pushing for the decision with both the GT and the Interceptor featuring quick steering and agile handling. If anything, the high, wide handlebars of the Interceptor make it the faster steering machine, it’s just the GT looks quicker when parked. I’d struggle to pick between the two if I was going to put one in my garage, although I did take a fancy to an Interceptor they had displayed complete with factory luggage and accessories. And talking of accessories, there are literally hundreds produced by Royal Enfield for the new bikes, meaning you can bespoke your ride with everything from handlebar weights to new saddles and fly screens. There’s even a complete range of clothing, that’s actually pretty cool. The suspension, despite being simple in its design, managed to handle the often varying road surfaces in the hills around Santa Cruz where we got to test the new bikes at an event the scale of which I’m sure Royal Enfield have never attempted before. With 140 journalists and unfortunately, influencers, invited to ride the new machines over four days, we never got a chance to stop, with presentations including a live stream worldwide from a beach venue that ended with a ‘Moto Rock’ band, whatever that is. Royal Enfield has got plenty resting on these new models, not only at home in India where there really isn’t a 650cc Twin segment but also around the world. Charismatic Royal Enfield CEO, Siddhartha Lal explained that there are 3million Classic owners in India, many of whom might be looking to step up to a bigger bike. It doesn’t take much math to work out you only need to reach a small percentage to be selling a lot of bikes. And then there’s the rest of the world who he is hoping they can convince to give Royal Enfield a shot. But then he’s not interested in targeting other brands – he wants to see new motorcyclists coming into the fold, lured by the charming looks, good manners and affordable price of the new 650 Twins.

Oh, and they’re backing their new products, too, with 3-year unlimited kilometre warranties in the American market that we’re expecting to be seen in NZ when the bikes arrive, probably in early 2019. We don’t know the NZ pricing yet, but it was announced the entry-level Interceptor will be $5799USD, and the GT 650 $5,999USD. That’s pretty cheap.

We love the looks of both the new models and after riding them for two days, we’re impressed with the handling, technology and (this is a big one for Royal Enfield to be successful), the build quality. The bikes performed faultlessly, with no-one mentioning anything going wrong.

So if you’re thinking about something different for the summer months, then maybe check out who your local Royal Enfield dealer is. Even if you don’t need a LAMS-approved motorcycle, both the GT and the Interceptor not only look great but are also a whole heap of fun. And that’s what we ride bikes for, right.